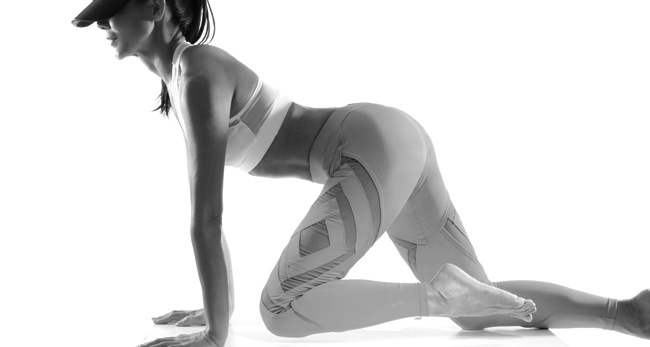 The name, AINIS is an acronym for "All I Need Is Style".  Fashion on it's own covers too broad a sentiment, where style can be unique to the person who embodies it.

AINIS is a Japanese activewear brand which fuses the functions of sportswear and aesthetic of fashion design. It was developed by Creative Director, Mayumi Asada through her passion for fashion, fitness, beauty, and love for Japan.  The product line is 100% made in Japan. The design concept behind the line is derived from the image you may conjure when looking upon lingerie or a dress; strong and feminine; simple and dramatic. They may be contrary to the image of sports, however, they are connected together in terms of sex appeal and excitement.

When Mayumi began looking for ways to improve her exercise routine, she found renewed energy through her consumption of unrefined foods. She realized that “humans are a part of nature,” and using this awareness, AINIS endeavors to offer as many eco-friendly accessories as possible.

To support people through exercise, to become more beautiful and healthy, in both body and mind. Our motivation is for the AINIS brand to motivate others to start and continue to exercise.

Through innovative technologies we aim to achieve this goal.

The icon of AINIS is a black cat that is sexy and graceful and shapes the initial “S” of style.

President and Creative Director of AINIS, Mayumi Asada has 11 years' experience within the luxury fashion industry and is an active fitness enthusiast. In 2013, Mayumi won third place in the 2013 Best Body Japan novice competition.
Fashion is one of the driving factors that led her to continue her exercise for over 10 years and overcome many of the challenges founders face.  Through her unique eye for beauty she is able to cultivate her creativity in fashion from each activity.  It is her goal to pursue both design and function and merge the fashion and fitness worlds together.

The Creative Director's personal experiences are closely connected to the AINIS brand.

In her mid 20s, even though she was full of energy and curiosity and never got tired, she thought that, unless she did something, she would end up in a poor state of health, and so Mayumi Asada began going to a gym on the way home from work. During her school days, even running 1 kilometer would have her huffing and puffing; she was by no means physically gifted. The first years were, honestly speaking, difficult and tough. There were many days that she had no motivation to continue, but her determination to turn this into a habit had her going to the gym at least three times a week. During her third year, it finally felt like completely part of her routine. Currently, she goes to the gym five times a week, and on the days that she cannot make it, she works out at home. Additionally, she placed third in the 2013 Best Body Japan Novice Competition, and she is continuing to have fun exercising while expanding her repertoire by participating in various new events, such as her first full marathon in 2014.

It was during that time, around 2004, when we saw the beginning of the collaboration between prominent fashion designers and major sports brands. Nowadays, it is unquestioned that the concept of luxury sports fashion is considered a single category. However, at that time, she can recall being quite surprised by the luxury fashion and sports worlds coming together. It goes without saying that activewear was a big motivational factor that helped support Mayumi to push through the difficult initial starting period of her exercise regimen while also helping her to enjoy it.

Luxury sports fashion is the key that enabled her to continue to exercise, something that she was not good at.

By creating a habit of exercising, she was freed from bloating and hot flashes; her weight has stabilized, and she is able to maintain a toned body. With one look, you can see the effects exercise has on the various changes a women's body goes through during aging: wiggly underarms, drooping stomach, saggy butt, and fat above the knees. (The Body's Health)
Additionally, even if something is weighing heavily on a person’s mind, after exercise, it will be cleared away and the mind refreshed, like a knot being quickly untangled. Even when people complain or overeat to deal with stress, nothing good comes of it. (The Heart's Health)

On the other hand, at work, she was mainly responsible for store sales in the retail industry, handling Europe's high-end ready-to-wear fashion. She harbored doubts about this industry. In general, compared with other industries, it was a gathering place for people with narcissistic tendencies who placed a high value on aesthetics, but paradoxically, there were very few people who had set exercise regimens for themselves.
The purpose of fashion is not to decorate one's outward appearance. Rather, it is something to bring out the inside (STYLE) and make the individual even more attractive. Furthermore, those who handle fashion should also bring out the best in it.

Over these 11 years, and through meeting many customers during this time, we are sure that no matter how old a woman is, she will always be interested in the possibility of being even a tiny bit more beautiful than she was a moment ago. We are proud and happy to have been able to be a part of helping this cause over the years. At the same time, we have learned about the effects of aging on the body.

According to World Population Prospects (2012) published by the United Nations, it is estimated that almost all developed nations, including Japan, by 2030 will be super-aged societies (that is, more than 21% of the population will be over 65). While looking at much of the rest of the world excluding Africa, in the same way, facing population ageing, it is natural that people will develop a stronger interest in their own health. [1]

The Olympics will be held in 2020 in Tokyo, Japan, 2018 in Pyeongchang, South Korea, and 2016 in Rio De Janeiro, Brazil. During the 2014 Sochi, Russia, and the 2012 London, UK, Olympics, as a fashionista, she was interested in the teams’ uniforms. No doubt, Japan fashion can shine even brighter in the international sports scene.

With all of this in mind, Mayumi made the decision to create her own brand, which would "support health and beauty through the lens of fashion."

Luxury sports fashion was undoubtedly the essential element that helped her maintain her exercise regimen, despite not being especially adept at it. From the time she was first inspired to exercise back in 2004, the number of brands that combine high fashion and sports (excluding golf and yoga) with features for users who exercise strenuously has not increased significantly. However, among these brands, there are some very popular brands who have dominated the market for over 10 years. She thought perhaps that, if the selection was more numerous, then it would help to increase the number of people who exercise regularly.

She continues to use a brand that was involved in creating the Olympic uniforms for the UK and originally bought it because she was attracted to the design. However, during her actual workout, she found there were some pieces that hindered her bodily movements. In order to avoid this type of frustration, the Creative Director personally tests out all the products at AINIS during her own workouts to check her level of comfort while wearing them.

AINIS’s activewear brand thus came to be, offering a product line that is 100% made in Japan and fuses high performance stretch fabrics with a desirable high-fashion aesthetic.

Through fashion, we hope to contribute to people’s health and beauty.

1. “The 2012 Revision of the World Population Prospects”. United Nations